LDHP: Describe what influenced your work, who did you influence.  Did you work individually, collectively, collaboratively?

JC: My work was influenced, as a very young person, by Miss Yvonne and Daddy Jack, when I danced for ten years at Miss Yvonne’s Dance Studio in Stratford NJ. Vaudevillians, hoofers, professional dancers and entertainers – couldn’t have had better introduction. We performed at USO shows throughout the tri-state region, for mentally handicapped and many others — lots and lots of on-stage time under sometimes bizarre and strange conditions.As a dance major at GWU, Maida Withers was my most important teacher-mentor, also introducing me to improvisation and ideas from the Wigman School. As a young professional dancing for Group Motion, Brigitta Herrmann was my greatest inspiration, also a Wigman student. There you go with my influences:  I’m off and on my way to Germany. Aside from being a member of Group Motion, touring and traveling with them, I went on to collaborate with a number of local Philly artists during my time in Philly: Michael Biello, Woofy Bubbles, Ishmael-Houston Jones, Fred Holland, Terry Fox, Dan Martin, Warren Mueller, Tonio Guerra – to name a few. My own performance evenings were solo dance with various musicians and artists, although working with Woofy Bubbles, Jeff Cain, Terry Fox, and Ellen Foreman was collaborative.  It seems the greatest influence I have had has been on my own kids, who cannot fathom taking such risks in their own young lives. So. Much later, recently, I would like to add that I have been deeply influenced by Royston Maldoom, a pioneer of enormous stature in Europe for Community Dance. This has yet to reach the US shores, and when it does, dance will rise again in the US! 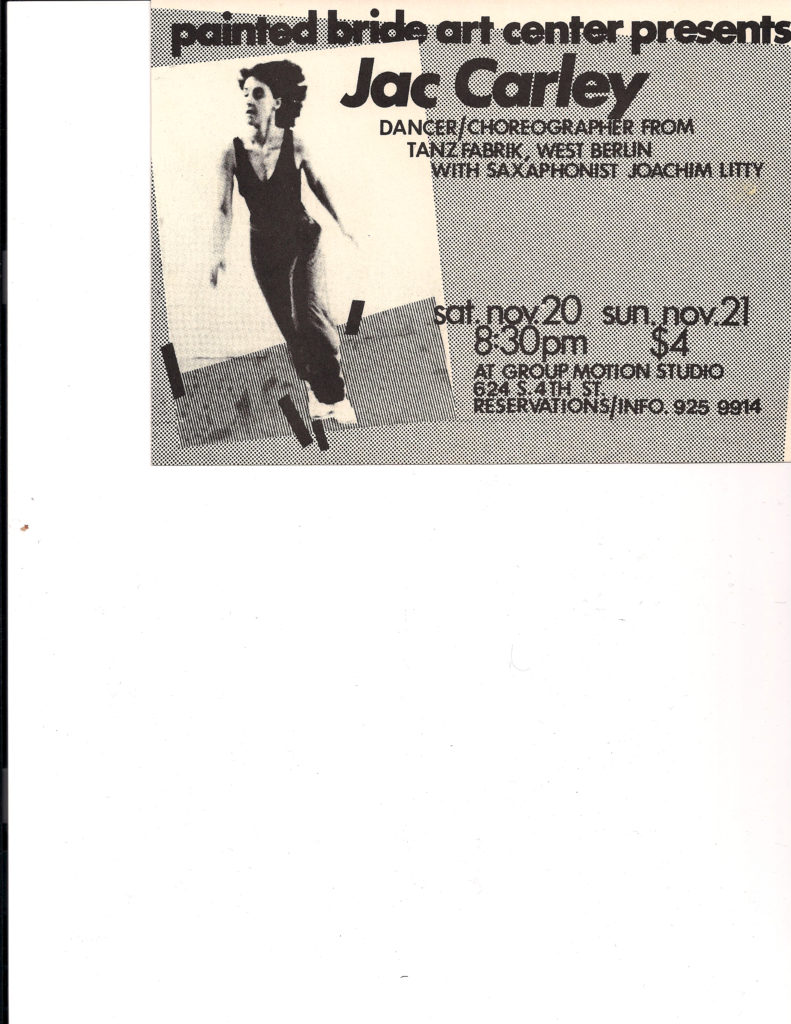 LDHP: Were there issues that you addressed in your work,  socio-political atmosphere of the time, antiwar movement, nature/environmental, spiritual, other -isms” activism, feminism.

JC: I was dancing to dance, dancing to figure out why the world is round and eventually determine why that could not be changed. I juggled plungers, danced to cowboy songs, wore porcelain masks, used speaking, clapped and spun, and pretty much just used what felt right for the piece. Later I did address historical political issues:  several of my major evening-length choreographies in Berlin used writings by Holocaust survivor Raymond Federman.I was, however, for a great part of my choreographic career, when my evening-length works were touring extensively, using writings and/or music by Gertrude Stein, Kurt Schwitters, Ernst Jandl, Andrj Biely, and John Cage, Raymond Federman.

JC: Form? Trying to improvise and reach an audience on an emotional level, using whatever tools I had to work out any given choreographic notion. I was deeply influenced by Limon, Hawkins techniques – now largely defunct – and of course totally smitten by Wigman/Group Motion improv structures and concepts. I did quite a lot of Cunningham at college, and kept up my ballet training that was begun at MIss Yvonne’s. I was willing to do anything called dance, and love everything from belly dancing to well, everything. I currently focus on tap, study with a Zen master who is a tap wizard, and this makes me unbearably happy because it harbors no ambition and a future of dancing without injuries.

LDHP: What of the material question? Did you make a living as an artist?
TB: The funding environment in Philadelphia was too unstable for me to stay and live the artist’s life there. This brings me to the discussion of myself, Terry Beck, as an artist, and Terry Beck Troupe, the company that made it possible for me to have a manager for a period of time, a studio and paid dancers to take on tour. For a while, the PA Council on the Arts supported professional management and dancers salaries with the hope that these funds would help local dance groups stabilize or professionalize. Then, Pew funded non-Philadelphia arts groups who partnered with Philadelphia based organizations to create opportunities for performances out-of-town. The Pew projects took Terry Beck Troupe to Dance Theater Workshop in NY and the Baltimore Theater Project (BTP) as a company in residence. In the second year of the BTP program, Philip Arnoult produced TBT at the Edinburgh Festival, a life changing opportunity for me that led to future projects in the UK. At the same time, Mike Pedretti and Nancy Hill built the MTI Theater which was an ideal space for my work.

At last, Philadelphia had a theater that was dedicated to dance and supported local artists. In addition, MTI brought me into a larger community of international movement theater artists and I came to see myself in this larger creative context. These years, 1988 to 1991, were my best years as a working artist in Philadelphia. I had everything I needed. But soon priorities changed among the funders, the infrastructures of my organization collapsed and I was not able to continue my work in Philadelphia at a level I could be proud of. Being disheartened and with great sadness, I closed Terry Beck Troupe and continued my work as choreographer overseas with performance artist/mime Daniel Stein in Paris, Diversions – The National Dance Company of Wales, and also Scottish National Dance. Both Diversion and Scottish National Dance toured my work throughout Europe and Asia for several years. I officially left Philadelphia in 1996. Since then I have become an acupuncture practitioner with a practice near Buffalo, NY and teach dance and movement studies at SUNY Fredonia.

LDHP: What was going on at the time? The prevailing zeitgeist?

JC: At the time, we were still very linked with Judson Street developments, and Doug Dunn also had a major influence on my work. Presenting in real theaters was not a reality, so galleries, rehearsal studios, and the like was where we/I would perform. That was zeitgeist, for certain, as it opened up the dance to new neighborhoods. I think the zeitgeist held more promise, despite miserable working conditions, because so many small modern companies were surviving, doing interesting work, and the idea that eventually financial survival would result with artistic discipline and diligence was in part reality. that type of surviving middle-sized company (with 4-6 dancers) no longer exists on such a broad scale. Also, Young Audiences offered quite a bit work for serious artists in the high schools.

LDHP: What of the material question? Did you make a living as an artist?

JC: I still have the final budget reports of my first self-produced works in Philadelphia, which were copied to show the musicians that I was not making money, not hiding money from them, and despite sold out houses, could not pay them more than I paid myself: about $50 for a good run. I worked as a secretary for NY Life Insurance company during that time, did minimal teaching, until moving to Berlin where I could make a living as a dancer/performer/choreographer. Once Tanzfabrik was up and running in Berlin, I was able to make a basic income although it was not enough to support a lifestyle with two children.

LDHP: What of the material question? Did you make a living as an artist?

JC: I still have the final budget reports of my first self-produced works in Philadelphia, which were copied to show the musicians that I was not making money, not hiding money from them, and despite sold out houses, could not pay them more than I paid myself: about $50 for a good run. I worked as a secretary for NY Life Insurance company during that time, did minimal teaching, until moving to Berlin where I could make a living as a dancer/performer/choreographer. Once Tanzfabrik was up and running in Berlin, I was able to make a basic income although it was not enough to support a lifestyle with two children.

JC: The German / Berlin connection was important for Philadelphia roots. Following that thought, perhaps a link to one/two of the most important venues here for local dance would make sense – some say they are quite indebted to Tanzfabrik innovating start-up decades here – for which I was crucial.   Also, I am now  (2014) On-site director for Sarah Lawrence College’s  Summer Arts in Berlin program, in which we explore the entire German modern dance history and its manifold influence on US dance. So a link to this would be ok too. As to local, vibrant Berlin venues that remind me of the places in Philly that enabled me to get a start: http://www.uferstudios.com/   and    http://www.dock11-berlin.de/  are just amazing, and present young companies and dance artists and dance film focus, workshops etc etc. Both sites are also in English.
Also of Interest: Gitta’s daughter (Laina Fischbeck) lives in and works collectively in a large dance project in southern France. This should be a link as well (I don’t have it.)