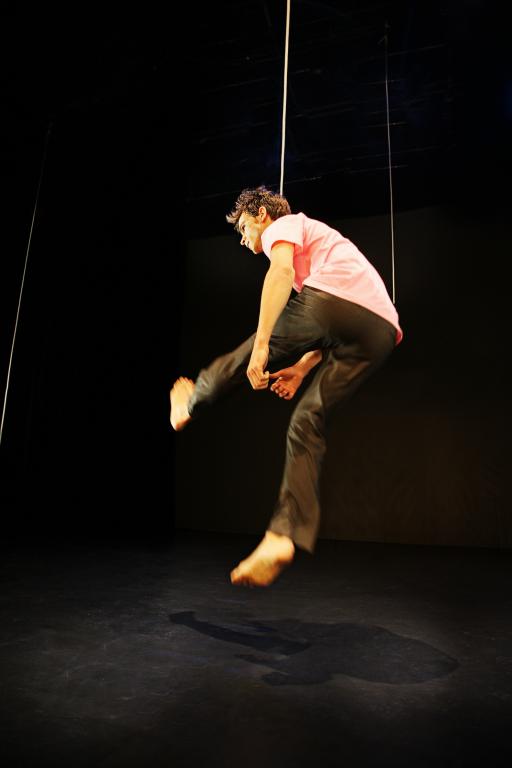 Each Local Dance History Project program is paired with a Next Up performance, providing a unique look at contemporary dance, past and future. Program I features Local Dance History Project artists Dan Martin and Michael Biello,Ishmael Houston-Jones, and Next Up artist Otto Ramstad. TheLocal Dance History Project offers an informative look at the development of contemporary dance in Philadelphia by showcasing the work of five dance and movement artists who were among the first to explore post modern, improvisation, and performance genres in the city during the late 1970s and early 80s. In 1980, dancers Dan Martin and Michael Biello, Jano Cohen, PDP’s Terry Fox, and Ishmael Houston-Jones were featured in Dance & Dancers, a sold-out presentation at the Harold Prince Theater at the Annenberg Center for Performing Arts. Now, in PDP Presents 2010, these five dancers will reunite to revisit and reconstruct their work, which will be performed by young Philadelphia dance artists.

Next Up features work by some of the freshest emerging choreographers– Chris Yon and Otto Ramstad, visiting from Minneapolis.Both choreographers represent a younger generation of dance artists who are not only building on the canon of what comprises contemporary dance, but who are widening its definition by asking questions of why we dance, and what roles or purpose dance artists’ work has in the lives of others.

Next Up | Otto Ramstad | Hello Nervous System
In this solo performance, Otto Ramstad choreographically researches how the nervous system spreads as a net of attention throughout the body. Playing both scientific observer and empathetic participant, Ramstad teases the distinctions between THE nervous system and HIS nervous system. More than an anatomical study, Hello Nervous System insists that the dancer you see in front of you is first and foremost a person. Ramstad will also perform with The BodyCartography Project in PDP Presents 2010’s SCUBA program.

The post-show discussion The Relevance of Yesterday to Today,moderated by Anna Drozdowski, Philadelphia-based dance writer and Curatorial Advisor for Next Up, will be held following the Saturday matinee programs on February 27 (Program I) and March 6 (Program II). The discussion will look at how the reconstructed works in the program relate to a younger generation of contemporary artists. The Local Dance History Project Forum will be held on February 28. The all-day event will feature a class with project artists, panel discussions and presentations.
The Local Dance History Project is made possible by a grant from the Pew Center for Arts & Heritage through Dance Advance, with additional support from the PA Humanities Council’s “Our Stories, Our Future” initiative and the Dolfinger McMahon Foundation.

Otto Ramstad(Director, Performer, Video Artist) is co-director of The BodyCartography Project, alongside Olive Bieringa. He has an insatiable interest in the process of creating kinesthetic visual images with movement.

Ramstad has been investigating improvisational movement formally since the age of six starting with master dance teacher and BMC practitioner Suzanne River and since via skateboarding and snowboarding, Capoiera Angola, Butoh, Tai Chi, contact improvisation and Tuning Scores. He is a practitioner of Body-Mind Centering (c) and holds a BA in Dance, Improvisation, and the Moving Image. He has been featured in the work of D.D. Dorvillier, Miguel Gutierrez, Morgan Thorson, Shelton Mann, Karen Nelson, Lisa Schmitt, and Kitt Johnson from Denmark. Ramstad has performed solo works in Denmark, Finland, England, New Zealand, Italy, NYC around the USA. His current solo Hello Nervous System was seen in Fresh Tracks at DTW, NYC, The Ritz Theatr, Minneapolis, and PanCreas Festival in Denmark.  Ramstad received a DanceWeb scholarhip at Impulstanz in Vienna 2005 & 2008.  He was an Archibald Bush Fellowship Artist 2006-2008. He was a Rolex Protegé Nominee in 2008.  Ramstad will create a commissioned work for the Lyon Opera Ballet in 2010.- HideMichael Biello and Dan Martinhttp://www.biellomartin.com

Michael Biello and Dan Martin are life-partners and longtime collaborators who have created a unique body of critically acclaimed work in musical theatre, dance theatre, and performance art.

Their newest musical in development, The Cousins Grimm, was workshopped at the Eugene O’Neill Theatre Center in 2008; it was also presented at the New York Music Theatre Festival where it received an Anna Sosenko Trust Award in 2007. Martin and Biello’s work has enjoyed success in Chicago, where Bailiwick’s production of their musical Breathe won the 1999 After Dark Award for Outstanding New Work and where, in 2000, Bailiwick commissioned and premiered their revue Q – the Songs of Martin & Biello. Breathe has been subsequently presented in various US cities including Philadelphia, Omaha, Richmond, and Dallas.

Ishmael Houston-Jonesimprovised dance and text work has been performed in New York City, across the United States, in Europe, Canada, Australia and Latin America.

Recent works include Nowhere, Now Here, commissioned for Mordine and Company in Chicago in spring 2001, and Specimens commissioned for Headlong Dance Theater in Philadelphia in 1998. From 1995-2000 he toured as part of the improvised trio Unsafe / Unsuited with Patrick Scully and Keith Hennessy. In 1997 he was the choreographer for Nayland Blake’s Hare Follies at the Brooklyn Academy of Music. In 1990 he and writer Dennis Cooper presented The Undead at the Los Angeles Festival of the Arts. In 1989 he collaborated with filmmaker Julie Dash on the video Relatives, which was aired nationally on the PBS series Alive From Off-Center (Alive TV). In 1984 Houston-Jones and Fred Holland shared a New York Dance and Performance Bessie Award for their Cowboys, Dreams and Ladders. From 2002-2007, Houston-Jones was the Coordinator for the Lambent Fellowship in the Arts of Tides Foundation. He also developed and implemented a program that awarded multi-year grants to individual visual and performing artists in metropolitan New York City; each year fellowships totaling $126,000 were awarded to six artists.- Hide