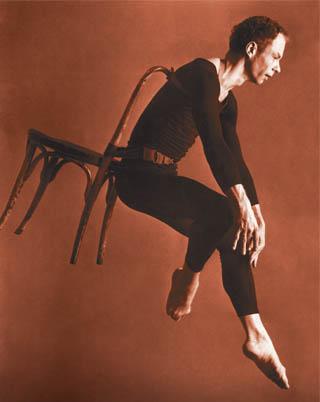 Breath Made Visible* (Ruedi Gerber/USA/2009/80min.) is an insightful documentary into the life and career of Anna Halprin, the groundbreaking dance pioneer, who at 90 years old is still breaking new barriers. This cinematic portrait blends recent interviews with counterparts such as the late Merce Cunningham, archival footage, and excerpts of current performances to weave a stunning, inspiring account of one of the most important cultural icons in modern dance.

Group Motion/Friday Night (Djuna Wojton/Philadelphia/2009/5min.) is a charming and straightforward documentary of Group Motion’s Friday Night Workshop that has been in session for over 35 years! Led by Group Motion co-founders Manfred Fischbeck and Brigitta Herrmann, the workshop draws everyday people of every stripe, age, and inclination who enjoy the structured improvs and live music.

Wednesday, October 5 at 8PM
Program 2: The Making of “Tango Macbeth”

A PDP Informance with Nadine Patterson, Lenny Seidman, and Zane Booker-
Local Filmmaker, Nadine Patterson will show excerpts and talk about her new work in which a documentary film crew follows the creation of a new dance theater film piece, Tango Macbeth. Part poetry, part narrative, part experimental film, this film pushes the boundaries of the mock-umentary format set to a fusion of Indian tabla, ambient sound, and Afro-Latin-Brazilian influences from composer Lenny Seidman with choreography by Zane Booker who will join in the conversation with the audience.

Shorts Fest features playful, place-based and layered works revealing the draw of dance to video, by videographers from Ireland, Canada, and the US including Philly locals Alex Tyson, Liz Goldberg, and Kathy Rose.

Strings (Liz Goldberg/Philadelphia/2002/3min)
A tangle of stringy figures dance through this delightful animation to their destiny.

Hoop (Marites Carino/2010/Canada/3:50min)*
In Hoop, the viewer’s perspective of the childhood toy shifts when the floor is pulled away.

Loom (9.25- Katie Faulkner/USA/2008/9.25min)
A relationship is stitched together and unraveled with a San Francisco backdrop.

Zepyhr ( Nadine Helstroffer/USA/2010/6min.)
Dancers cavort about and mimic a blossomy day in the park.

Deep End Dance (David Bolger/Ireland/2010/6.14min.)
Acclaimed Irish Choreographer David Bolger has created a tender homage Swimming With My Mother for the stage. Deep End Dance is made for a pool in which his mother also “dances.”

*Selections from Dance On Camera Festival at Lincoln Center

As the Merce Cunningham Company will disband at the end of this year, PDP invites everyone to revisit Atlas’ beautiful and biographical portrait of Cunningham and his company over the years. Lest we forget….
“You have to love dancing to stick to it. It gives you nothing back, no manuscripts to store away, no paintings to show on walls and maybe hang in museums, no poems to be printed and sold, nothing but that single fleeting moment when you feel alive. ” – Merce Cunningham


Motion Pictures Intermission between programs each night will include free popcorn and drinks, our latest YouTube faves and a Special Video Installation by Kathy Rose–  Vortex a dimensionally magical illusion creating a mesmerizing miniature world of the interior, of thought, and meditation, integrating video with veils on a small “canvas” on which figures flow and drip in a universe of their own.