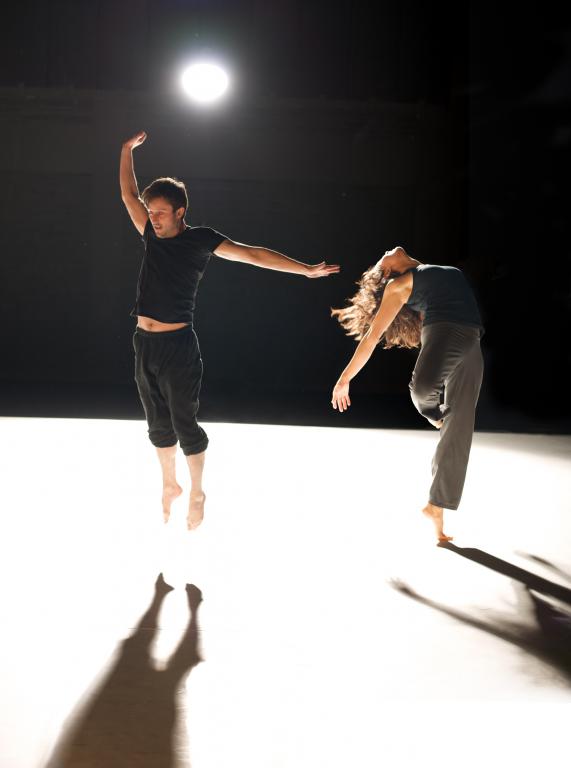 Two choreographers on a shared program.

John Scott, from Dublin, Ireland, seeks to expose the tenor of movement relationships which are laden with human aspects, where music and light expand the dimension of motion/emotion. Body Duet is an energy-packed, highly physical dance featuring two spiritual and witty performers, New York’s “Bessie” award winning Michelle Boulé and one of Ireland’s outstanding male dancers, Philip Connaughton. Choreographed by John Scott with music by the dynamic US duo Blackfish and lighting by Eric Würtz.

Theses performances made possible in part with support from Culture Ireland and the Drexel University Dance Program.

John Scott, director and choreographer for the Irish Modern Dance Theatre, and dancers Michelle Boulé and Philip Connaughton will team lead a workshop starting with warm-up techniques, physical and vocal that will set up creative propositions which mirror the exciting, amusing, and sometimes surreal creative processes Scott employs in the creation of his work. Calling on differing levels of virtuosity- physical, spiritual, and vocal- this workshop is open to all dancers and people who like to dance/move. All virtuosities and body types are welcome to join in.

Nora Gibson is a Philadelphia-based dancer and choreographer whose training spans classical ballet to postmodern dance and improvisation. Gibson trained with Sylvester Campbell at Baltimore School for the Arts, and through ballet residencies at Chautauqua and NCSA. She later graduated with a BFA from Tisch, at NYU, where she had the opportunity to perform in the works of Elisa Monte and Mark Morris.  Gibson studied improvisational forms with Daniel Lepkoff, Nancy StarkSmith, and KJ Holmes. Gibson has had the privilege of dancing for the Ellicott City Ballet, PATH Dance Company, Andrew Marcus, ClancyWorks Dance, and Jeffrey Gunshol. She was selected to perform in the reconstruction of 1970s works by Lucinda Childs, under the direction of Childs and Ty Boomershine, and has performed this work over the last three years. Last summer, Gibson was awarded an artistic residency in Poland. She has performed her own work throughout Philadelphia and in NYC at various downtown venues such as P.S. 122, St. Marks Church, and DIA Center for the Arts. In 2009, she established Nora Gibson Performance Project, with Philadelphia as its home base (http://noragibsonperformanceproject.weebly.com/.) Since that time, her work has consistently received recognition. Gibson was awarded a 2009-10 Artist in Residence with the nEW Festival in Philadelphia, the CEC New Edge Residency for 2009-10, and the Ellen Forman Memorial Award in 2011. Her work has been commissioned by Drexel University and Bryn Mawr College. Gibson’s choreography has begun touring, and was presented by New Dance Alliance at Joyce SOHO, and co-presented by Dance Place in D.C. Gibson is thrilled to be presented by PDP this year in Philadelphia.

Clifford Greer is a lighting designer and technician with interest in creating unique lighting states for dance and live performance. He pursues a lighting-as-art approach in his lighting design work for dance, and past projects include lighting design for Jerome Bel, The nEW Festival, the Reactionaries, and many other choreographers. Recent projects include a collaborative lab with Nora Gibson Performance Project, producing original lighting and dance work, in studio, side by side. In summer 2013, Greer co-led a workshop for lighting and dance with Dutch lighting artist, Katinka Marac and Nora Gibson.

The IMDT is a culturally diverse modern/post modern inspired dance company based in Dublin under the direction of Founder/Artistic Director/Choreographer John Scott. The Company engages dancers of different backgrounds, ages, and body types from Ireland, Europe, Africa, and USA. Scott pioneers innovative dance expression and promotes dialogue with international dance practitioners and audiences to achieve this. http://www.irishmoderndancetheatre.com/IMDT/About.html

Michelle Boulé is a performer, choreographer, teacher, and BodyTalk practitioner based in New York. Her work has been shown in New York at Dance and Process at The Kitchen, Center for Performance Research, Movement Research Festival at Judson Church, Food for Thought at Danspace Project, Catch Series, and Issue Project Room (Emerging Artist Commission May 2013). She has been a choreographic assistant and performance coach for Deborah Hay’s solo adaptations, including an adaptation presented by El Auditorio in Tenerife, Spain. In 2010, she was an artist-in-residence at DanceHouse in Dublin, Ireland and a participant at the SKITE residency in Caen, France. She received a 2012 space grant from Brooklyn Arts Exchange and is a 2012-14 NY Movement Research Artist-in-Residence.

She has collaborated and performed in every group piece by Miguel Gutierrez and the Powerful People since 2001, and received a ‘Bessie’ for her performance as James Dean and collaboration in the creation of Last Meadow. Other dance artists she has worked with include John Jasperse, John Scott, Deborah Hay (William Forsythe commission If I Sing to You), David Wampach, Donna Uchizono, Neal Medlyn, Christine Elmo, Neal Beasley, Beth Gill, Judith Sanchez-Ruiz, Doug Varone (Metropolitan Opera Ballet, Opera Colorado), and Gabriel Masson.  She has also worked with playwright/director Rosie Goldensohn and has an ongoing collaborative relationship with cellist/composer Okkyung Lee.  Boulé is part of the teaching faculty at Movement Research and The New School in New York.  She has also been a member of the faculty at Hollins University and the University of Illinois, as well as a guest teacher at other dance institutions in North America, Europe, Australia, and Asia.

Philip Connaughton was born in Dublin where he trained prior to continuing his studies at Rambert Dance School in London. Since then he has worked internationally in contemporary dance, musicals, and opera including Bavarian State Opera, Glyndbourne Opera, and Wexford Festival Opera. Philip joined Irish Modern Dance Theatre in 1997 and has created roles in numerous works by Artistic Director John Scott which have toured in USA, France, Brazil, Estonia, and Italy, including Just Bodies, Intimate Gold, That Place Those People, Rough Air, Fall and Recover, and The White Piece. Connaughton has also created roles in works by John Jasperse, Sara Rudner, Chris Yon, and Sean Curran. He also works in Barcelona, Spain, and has performed with companies like Thomas Noone Dance, Rami Levi, and Lanonima Imperial.Location: Performance Garage1515 Brandywine StreetPhiladelphia 19130Phone: (215) 546-2552See map: Google Maps