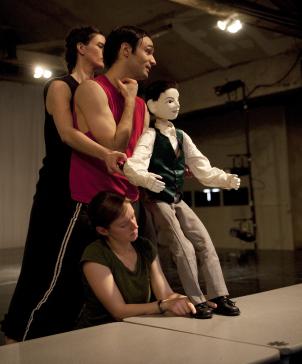 My get-your-ass-out-of-the-audience-seat highpoints for March were the two PDP workshops I joined, taught by Christopher Williams and Ishmael Houston-Jones, plus a Williams’ Informance. I don’t think dance workshops can get better than these offered by two amazing artists in from New York at the Performing Garage on Brandywine.

This was my own discovery of Williams, a Nijinsky-like genius.  The foundation gods should rain a MacArthur on this fellow. I’m ready to offer sacrifices or whatever it takes for this divine intervention. Williams taught a dance/puppetry workshop—decidedly not on the usual dance workshop menu. Aided by the stunning Caitlyn Scranton, also down from NY—she danced the Lucinda Childs solo role in the reconstruction of Childs’ “Dances”—Williams taught a section from his Portuguese Suite work, a challenge not only for me I should add. Then he pulled out a Bunraku puppet, and we spent the rest of time, a trio of us at a time, huddled as one mass behind the 3 to 4 foot puppet, re-creating that same dance movement on the inanimate dancer-to-be. My viewing of puppets will be forever altered by the experience.

Beyond his dance chops as a choreographer and dancer with Tere O’Connor and Douglas Dunn, this guy has high art puppeteer skills which you can see in the upcoming master puppeteer, Basil Twist’s Petrushka (Annenberg, April 6—16) where Williams will be the Ballet Captain (what a name) setting the puppets’ choreography and performing the title puppet role of Petrushka.

Later in the evening, and starting off with a Hans Memling northern Renaissance image of St. Ursula—who actually looked like a mother puppeteer with her children or angels strung under her outstretched arms—Williams gave an amazing talk with selected video and images from two epic works, one a series of solos of women saints, called Ursula and the 11,000 Virgins (winning a “Bessie” in 2005), and from the apocryphal, The Golden Legend, another dance series of male saints, which Williams described as the tales of comic book heroes.

Meticulously researched and presented with some of the best of New York’s dancers, these works both seemed true to the crazy stories of sainthood  with a contemporary mix of humor and irony, and an in your face eroticism and sensuality that only dance can create. St. Lawrence gets grilled alive in a torrent of homoeroticism and pain upon a grill created by the crossed arms of his fellow dancers upon which he is tossed. St. Francis speaks original text in Italian as he struggles with his loneliness. St. Vincent of Saragossa’s dance includes a crow puppet alighting protectively around his body, which after multiple tortures and deaths, is tossed into the wilderness for beasts to devour.

Williams is brilliant in every way a great artist can be and winsomely articulate about his work while retaining a down to earth humility.  His dance seemed to encompass the entire range from the early moderns (for whom gods and natural forces were ready subject matter) to the post-moderns.  We’ve got to find a way to bring these works to Philadelphia as even in New York, as they apparently had single, short duration runs. Presenter and funding gods, are you listening?

A couple of weeks later Ishmael Houston-Jones hopped off a train from New York to make a return-to-roots Philadelphia visit for his workshop on joining spoken narrative and movement. Ishmael, a master teacher and artist, and the most relaxing and likeable of guys to hang out with in a dance studio, wove a wonderful series of exercises, including spontaneous and from memory writing, improv movement exercises, and then subtle joining of individual spoken narrative with movement, leading to end of session performances in which we broke into quartets.

The quartets had each person bring in one’s own narratives and movements which quickly dissolved in part under the influence of the other three’s words and movement—a stew of surprising results, which was sufficiently rich and eye-opening that I yearned for 2nd and 3rd rounds, which couldn’t occur in the time-frame. Ishmael’s early work was reconstructed a year ago in a PDP program of late 70s and early 80s Philadelphia work, which has happily led to Greg Holt—in an Ishmael piece then— being invited to tour with Ishmael in  Europe later in the year. Terry Fox/PDP’s magic at work.Published on April 4, 2011 – 4:05pm