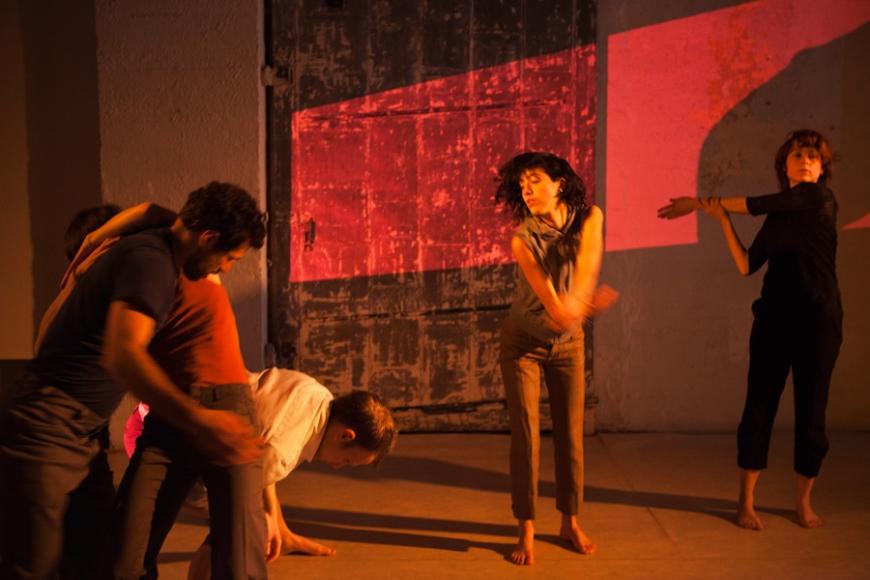 An Inner Place That Has No Place is part of a suite of dance and film works exploring memory and memory loss – personal, material, and societal.  Created by choreographer/dancer Shannon Stewart in collaboration with filmmaker Adam Sekuler, composer Jeff Huston, and performers Meredith Horiuchi, Mary Margaret Moore, Aaron Swartzman, Rosa Vissers, and David Wolbrecht, the work fulfills the physicality of space with atomized motion that is distilled through choreography into distinct dance units.

“…dancers beautifully balance their way trough a complicated scheme of light, sound and video of themselves that is rich and disorienting.”    “…ruggedly athletic”  –Seattle Times

Shannon Stewart’s choreography is filled with brave, unusual contrasts and is by turns athletic, detail-oriented and tranquil.”  –Seattle Dances

With a mix of intellect and exuberance, the Green Chair trio of dancer/director/choreographers Sarah Gladwin-Camp, Gregory Holt, and Hannah DeKeijzer create accessible dance/theater works that draw from diverse backgrounds in improvisation, linguistics, math, and a wide swath of movement techniques.

“Green Chair Dance Group showed a charming ability to connect with its viewers and make us feel like we were part of the show: that they were there for us, just like they are there for each other.”  –thINKing Dance

Sarah Gladwin Camp
Sarah began dance life at Swarthmore College and continued studying at Laban School for Contemporary Dance and The Circus Space in London. As a professional dancer and choreographer, she has participated in festivals in Lithuania, Slovakia, Finland, Poland, Florida, Connecticut, Colorado, California, West Virginia, and Pennsylvania, and has performed with groups in Italy, England, and NYC. In addition to collaborating and helping run Green Chair, she is on the Board at Mascher Space Cooperative, is an Associate Artist with Workshop for Potential Movement, performs with Grounded Aerial Dance Theater, and this year joined the Advisory Board of DanceUSA/Philadelphia. In 2009/2010 she was a nEW Artist and began long-term project of building a piece with oceans made of 12 dancers and a dangerous army of combat bunnies.  Here in Philadelphia she created and runs ZoomDance Action Adventure Story-Telling Dance Classes for young kids.

Hannah de Keijzer
Hannah is a dancer and choreographer who thrives in collaborative creation and whose work challenges artists (including herself) to expand their performance presence. In addition to her work with Green Chair, she has enjoyed performing with Anisa George/Penn Dixie Productions, Gabrielle Revlock, Charles O. Anderson/dance theatre X, Ellen Gerdes, Marcel Williams Foster, Kelley Donovan, and others. She also runs a massage therapy practice in Philadelphia and is the Audience Experience Manager for Team Sunshine Performance Corporation, an ensemble theater company.

Gregory Holt
Gregory learned how to build human towers in high school, and has been experimenting in movement ever since. His work is nearly always collaborative and process-driven, and has been shown in festivals and venues across Europe and the United States. He has a BA in Movement Research and Performance from the Institute for Dance Art at Anton Bruckner University in Linz, Austria, where he has also taught seminars in dance composition. He has paired with Berlin-based artist An Kaler on several projects, and their short dance films have been shown in numerous festivals around the world, including the Body Navigation Festival in St. Petersburg, the International Dance Film Festival in Yokohama, and New Video Dance Festival in Tel Aviv. Locally in Philadelphia, he dances for several choreographers and performance groups including Brian Sanders/JUNK, Jumatatu Poe/idiosynCrazy productions, Gabrielle Revlock/Manodamno, and Marcelo Rueda. His dance work and development has been supported by two Dance Advance professional development grants, the Research into the Unknown residency in Budapest, and the Lockwood Fellowship.

Shannon is a 2012 participant of Deborah Hay’s Solo Performance Commissioning Project and is developing a body of work entitled David Aand Deborah through a residency at Velocity Dance Center, the support of Seattle Art Museum, and 82 individual patrons. For her last suite of work she was awarded Individual Artist Funding from 4Culture and two years of residencies from Seattle Storefronts, Open Flight (Seattle), the Mouth Studio (Portland), and Studio Current (Seattle).  Her work has been presented in Seattle, Tacoma, Portland, and Oakland and screened in numerous film festivals.  She has had the privilege of dancing with Sebastian Matthias (2012), zoe | juniper (2005-2010), Dayna Hanson (2010), Kathleen Hermesdorf (2007-2008), and many others.  Shannon received degrees in Urban Planning and Dance from the University of Washington and teaches technique, improvisation, GYROKINESIS®, and is a teaching artist with the Mark Morris Dance for Parkinson’s program.

Jeffrey Huston (composer) is a Seattle based multi-disciplinary artist. He is currently exploring the expressive potential of sound in a variety of contexts, including the experimental duet: Dead Hot. He is also investigating his relationship to song writing, notation, impulse and intentionality. Jeff holds a Bachelors of Music from Cornish College of the Arts.