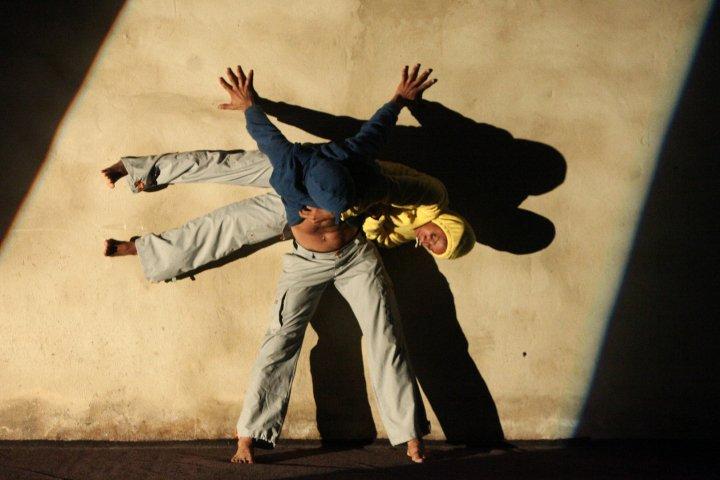 Amelia Reeber will perform her solo “this is a forgery” (excerpt). A multi-media look at how our lives unfold in the flux of what we seek, what we receive, and how we respond, “this is a forgery” is the latest from one of Seattleʼs most powerful choreographic voices- one that blends virtuosity with a knack for exploring personal discovery onstage in a manner that is genuine, entertaining, and often hysterically funny.

Amelia Reeber performs, choreographs, practices BodyTalk and spends time as Velocity Dance Centerʼs 2010 Choreographer in Residence. She has created many short works that reflect her interest in the narrative of the body in relationship with time/space, landscape, and the human experience. In 2010, she produced/performed an evening length solo, this is a forgery.

Amelia has performed in four works by seminal American choreographer Deborah Hay and toured internationally during 2008-09. Reeberʼs solo, Peak and Draft, was presented with Mountain in the Northwest Artist Series at On the Boards and, while traveling in Cambodia, Amelia had the opportunity to perform that work for the Khmer Arts Ensemble.

Amelia has collaborated with and performed for a range of fantastic artists. She was a founding member of Foot In Mouth, a choreographer/composer collaboration whose work was presented as part of OtB’s Northwest Artist Series at in 2005. Also in 2005, she toured Pat Graney Companyʼs The Vivian Girls.

She has received support for her work from City of Seattle Office of Arts & Cultural Affairs, 4Culture, smART ventures, Artist Trust and more. She was 2006 Artist Trust Fellowship recipient in choreography. In December 2009, Amelia won the Joyce Theaterʼs A.W.A.R.D. Show! 2009 at On the Boards www.ameliareeber.com

Originally from North Carolina, Katie Faulkner received her MFA in dance performance & choreography from Mills College in 2002. Since graduating from Mills, Faulkner has performed the works of Bill T. Jones, Randee Paufve, Stephen Petronio, June Watanabe, Victoria Marks, Abigail Hosein, Kim Epifano and Ann Carlson. She has worked with several of these choreographers as a dancer with AXIS Dance Company, with whom she performed both locally and nationally from 2003-2007. She has enjoyed teaching students of all ages and abilities around the country and at institutions such as Santa Clara University, Shawl-Anderson Dance Center, Marin Ballet, the University of California, Berkeley, and she is currently on faculty at the University of San Francisco and Mills College.

Faulkner’s choreography and film work have been presented by the Renaud-Wilson Dance Festival, the WestWave Dance Festival, Hampshire College, Motion Pictures, the Julia Morgan Center for the Arts’ Dance IS Festival, the Oakland Dance Festival, 8x8x8, ODC Theater and the Monterey Dance Festival. She has been commissioned to choreograph works for the Mills College Repertory Company, Kate Mitchell & Dancers, AXIS Dance Company, the University of California, Berkeley, the Erika Shuch Performance Project, and the University of San Francisco Dance Ensemble and has received support from the Zellerbach Family Foundation and the Theater Bay Area CA$H Grant. She has been awarded residencies with the Shawl-Anderson Dance Center, the Djerassi Resident Artist Program, the Marin Headlands, the Maggie Allesee National Center for Choreography, and will be in residence at ODC Theater from 2009-2011. She was an Isadora Duncan Dance Award (Izzie) nominee in Visual Design with collaborators Benjamin Goldman and JC Earle for her 2008 trio, ‘The Dry Line’, and she received a Special Izzie Award with Benjamin Goldman for her 2008 dance film ‘LOOM’ . She was recently nominated for an Izzie in the category of Music/Text/Sound for her musical performance in Manuelito Biag’s 2009 ‘Terra Incognita’. www.littleseismicdance.org

A dance/theater company based in Philadelphia, idiosynCrazy productions with Artistic Director Jumatatu Poe pushes live performance to imaginative edges through exhaustive exploration of movement, intimate interactions with audiences, and engaging collaborations with theatrical designers. idiosynCrazy unites a vibrant collection of diverse performers, journeying with audiences into other worlds—to make more sense of this one.