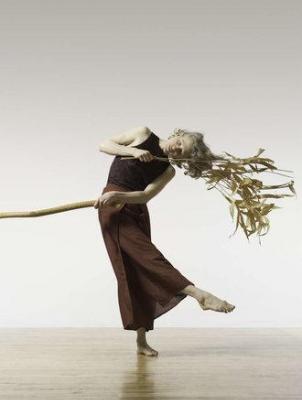 Dancer and choreographer Leah Stein has been performing and redefining the space between stage and audience in Philly since the late ’80s, despite what the title of the Leah Stein Dance Company 10th Anniversary Concert last weekend may imply. (The anniversary is of the company’s official status as a nonprofit.) Stein is best known for her site-specific pieces, which often require a viewer to walk around to catch what’s happening in various areas, and no retrospective of her work would be complete without them. This begs the obvious logistical question of how to port works designed for a specific vacant lot, field or fountain to the indoor stage of Spring Garden’s Performance Garage.

Stein’s solution was to not even try to bring certain works back to life. Instead, she showed short video clips of nontransferable pieces like 1993’s “Departure,” danced in a Fairmount Park meadow, 2005’s “Bardo,” presented in an empty lot on South Broad Street and 2000’s “Falling From the Sky,” where the cast interacted with fields and fountains at Longwood Gardens. And while the wonderment of witnessing LSDC’s movement forays firsthand was diminished, there was still a sensory experience to be had: Heads in the audience visibly nodding in recognition and recollection.

Stein’s work is extremely tactile, with an ever-present passion for exploration. Performers climb walls, wade through water, pick up fallen branches and fully interact with whatever happens to be in their space. This holds true for the music, too: Stein’s longtime collaborator, percussionist Toshi Makihara, who appeared both live and on video, is a master of found sound — music created from objects not normally considered instruments.

Makihara’s contribution to LSDC extends to movement performance, as in “Cabbage Two,” a humorous work he and Stein created in 1989 that proves anything can be a prop for this pair. Cabbages are chomped on, picked apart and pounded on the floor in a playful display that shows how even the simplest things can be a source of intriguing investigation.

Other works that were performed on site highlighted the expressionistic, contact-improv-based nature of LSDC. In 2002’s “Kite,” Stein and Jungwoong Kim bobbed, weaved and swooshed their bodies to anthropomorphize flying objects bandied about by the wind. For “Hull,” a work in progress, Kim, David Konyk and Michele Tantoco tossed and turned a sculpture of a boat hull, eliciting a sense of being lost at sea.

The plaintive “A Lily Lilies” (2011) featured poetry recited by Josey Foo, who spoke of notions of displacement and a reverence for the natural landscape, while an outtake from “Battle Hymns” (2009) reflected on the Civil War. “Beckon,” the finale, was a light-hearted improvisation featuring the full company plus tap dancer Germaine Ingram.

Even with such a varied slate, a thoughtful sensitivity and continuity was obvious throughout the concert, hosted by Philadelphia Dance Projects. Symbols and metaphors were abundant, and everything involved intimate relationships and interactions — between the performers, surroundings, music and (last, but surely not least) audience.Published on May 10, 2012 – 4:34pm