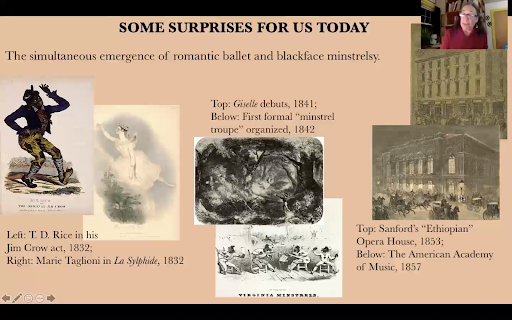 Dr. Lynn Matluck Brooks is the Arthur and Katherine Shadek Humanities Professor Emerita at Franklin & Marshall College, where she founded the Dance Program in 1984. A recipient of several distinguished awards for her teaching, she has also earned grants from the Fulbright/Hayes Commission, Pennsylvania Council on the Arts, National Endowment for the Humanities, and Andrew W. Mellon Foundation. Brooks has presented her work at conferences and symposia in the U.S., Canada, and Europe, and has served on boards of the World Dance Alliance, Society for Dance History Scholars, and Congress on Research in Dance. She has authored books and scholarly articles, served as performance reviewer for Dance Magazine, editor of Dance Research Journal and Dance Chronicle, and writer and editor for Philadelphia’s thINKingDance.org
In her illustrated Informance Dr. Lynn Matluck-Brooks will focus on the critical “antebellum” period of Philadelphia’s history, from 1820 to 1860; it reveals the trajectory of the her current research, some important findings, the nature of archival material available in Philly and elsewhere, and the complexities of cultural, political, and scientific interplays in shaping this city’s—and this nation’s—dance history.
She says, “ Dance exists in the ‘now,’ but it leaves traces: memories, notes, reviews, schools of thought and of pedagogy, choreographic traditions, designs, depictions, and a wide range of archival documentation. These become the stuff of dance historiography. In my work as a dance historian, these materials shape the territory I tread, abroad and at home. They led me, for example, to the realization that professional theatrical dancing in the early United States started here—in Philadelphia—laying a foundation that has sustained Philadelphia’s dance scene to this day, and establishing ground on which dance in America has continued to build.
An overlooked history, but a true one, it’s time to right the narrative that there was no ‘real’ stage-dance art in this nation until well into the twentieth century, and that New York was where it all began. In fact, theatrical dancing was unfolding just as the new nation’s political forms were taking shape, endeavors in which Philadelphia played leading roles. Dancing social and theatrical, in the City of Brotherly Love and elsewhere, figured into contests about bodies, citizenship, rights, ethnicity, race, science, and humanity.”