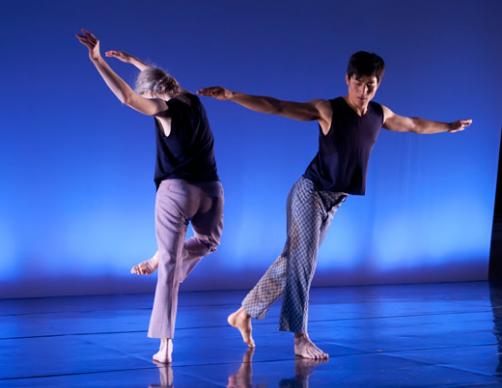 Once a space is energized, it is never the same again. -Meredith Monk*

Leah Stein’s dances take place in the present tense. Beginning with a radically open, movement-based mindfulness of her body and the surrounding environment, she induces a similar sense of presence in her dancers and collaborators to what is around them. Somehow, this expanded awareness makes its way into the audience. It may be, as Meredith Monk suggests, that even the surroundings are awakened in a new way. Anyone who has been to one of her performances has experienced this. I remember first seeing her work, as she and a group of dancers and non-dancers moved through the high grass of a Fairmount Park meadow in the late-afternoon summer sun (Departure, 1993), as if it were happening now.

Her outdoor work, which has been a touchstone for her and her company, has this gently transgressive and powerful effect. The act of moving through places where dancers don’t usually go compels a heightened attention right away. Watch her dancers travel through a vacant lot (Bardo, 2005), exploring the effects of bodies against brick, gravel and each other, with the growing awareness that the lot is not vacant: it is filled with stuff, both concrete and ephemeral – growing weeds, leaning beams, street sounds – that have been waiting to be attended to.

This mind-opening effect is shared, to an extent, with other practitioners of the small but significant field of site-specific dance. Coming out of Happenings and other hybrid artistic developments of the 1950’s and 60’s, site-specific dance was birthed through experiments by Monk, Trisha Brown, Anna Halprin and others. Stein is of a younger generation, but her calling toward place-based dance, starting with a childhood spent absorbing the countryside of New York’s Hudson Valley, feels inevitable, and her work is her own.

Some things that her work is not: although it may take place on a city street, it is never confrontational. Although her work is infused with awareness of the many layers of meaning embodied in each place, it is utterly free of polemics. Instead, viewers are welcomed into a potential space where they can make their own connections. Stein’s artistic coming-of-age through contact improvisation and other related disciplines gave her a model for direct encounter with a respected partner, following the leading edge of the unexpected to a new experience. The moments of discovery that come regularly in her performances – funny, hushed or breathtaking – issue from this.

Stein’s arena of awareness extends to sound, and the relationship of movement and sound in her work has deepened over the years. Her long collaboration with percussionist Toshi Makihara, who sensitively “plays” walls, trees and other available surfaces, has helped bring about moments of great attunement. In the past five years, collaborative projects with composers including David Lang and Pauline Oliveros have resulted in some of her most large-scale and ambitious works. The haunting Urban ECHO: Circle Told (with Oliveros, 2008), staged in the resonant domed chamber of The Rotunda with members of the Mendelssohn Choir moving along with the dancers, allowed a blossoming of the sensuous interplay of moving sound and sounding movement.

Whether happening outdoors or indoors, in natural, built or decaying spaces, what her work always delivers is a sense of communion. Stein’s brave and generous approach to making dance brings about a new, communal awareness in us. And once our awareness has been activated, it is never the same again.

[Miriam Seidel is a writer, critic and curator and currently corresponding Editor for Art in America. She covered dance for the Philadelphia Inquirer from 1990-2005.]

Faye Driscoll is going deep; she is smart, rigorous, and creating fiercely relevant and imaginative work.   At the center of Driscoll’s work is full force physical commitment laying bare the states and relationships evolving over and within the performers’ bodies, evolutions that manifest in nameable archetypes and then just as quickly dissolve and disappear from our view.  Driscoll’s work presents a body housing multiple narratives, a human living out many relationships and identities.  And she does all this without engaging with forced theatrics; instead identifications emerge from within, proving a permeable body being stretched by the bounds of her work itself.  In this intermingling of “reality” and “imagination”, Driscoll’s work challenges the very notion of representation and explores how we construct identity and narrative, and how we simply exist next to another body.

Driscoll exists in the vanguard of artistic inquiry around performance practice and associative identity.
I consider Faye Driscoll a necessary and welcome voice in the contemporary performance community.
We are so happy to have her here.

[Meg Foley, independent choreographer/dancer, is founder of Moving Parts (movingpartsdance.org).
Her next performance is March 28-31, 2012 at theBadass Fun Dance: a mini-festival, at Harbourfront CentreToronto, Ontario]Published on May 16, 2012 – 12:25pm