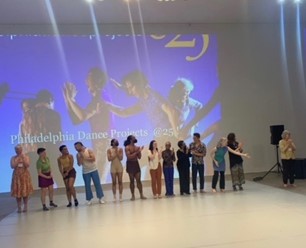 Will premiere Glimpse “how fleeting the phases of life can be, especially when we don’t fully live in the present.”

About the Artists:
Putty Dance Project produces socially conscious, critically acclaimed works. The artists, Musician Brent White and Dancer, Lauren Putty White have presented their work at the Kimmel Center in Philadelphia, Baltimore Dance Invitational, Boston Contemporary Dance Festival, San Francisco’s Virtual Pathways, and most recently, the Poster House block party in NYC.
Together they have draw upon the sense of community at the heart of African American culture. Lauren Putty also draws from her background in various dance forms as well as performing with the Sun Ra Arkestra. Her credits include touring with Philadanco and Parsons as well as artistic residences at Bryn Mawr College and Cornell University. An Assistant Teaching Professor in Music at Drexel University, Brent White uses his scholarly research and performing experiences from touring internationally with the Sun Ra Arkestra to playing with the likes of Captain Black Big Band and other various artists to inspire his creative practice.

In two separate week runs each artist will premiere works tracing lineages that embody perceptions both inward and outward.

Phillips’ interdisciplinary work will weave her girlhood memories of growing up in coal country in West Virginia, shedding light on marginalized groups in Appalachia highlighting conditions of labor, economic disparity and environmental justice. It will demonstrate that these issues exist everywhere, creating a dialog that’s both rural and urban.

Wilson’s new work is a multidisciplinary, participatory event that explores her relationship to her maternal grandfather who grew up in rural Alleghany County, New York. The myth of Prometheus is woven into the work through exploring her own body as a landscape of heritage. She says by touching his legacy I am inevitably brought into a relationship to the legacy of the Middaughs: some of the first settlers in the region who actively displaced the Susquehannock residents.”

The two weeks at the Icebox Projects include performances, workshops, a line-dancing session and an indoor picnic in the mountains, and more… Info to follow.

About the Artists:
PAIGE PHILLIPS’ artwork is at the intersection of performing and visual arts, engaging most frequently with dance, installation and video. Originally from West Virginia, she resides in Philadelphia. Her work has been presented nationally and abroad at the Bangkok Art and Cultural Center, the National Museum of Singapore, Park Gallery (Katmandu, Nepal) and the Judson Church through Movement Research (NYC), Velocity Dance Center (Seattle), Urban Arts Center (Columbus) along with Philadelphia venues, Mascher Space, Group Motion’s Uhr Spiel Series, Vox Populi, High Tide Gallery and Little Berlin. Her work has been supported by the US Embassies in Nepal and Singapore, Ohio Arts Council and the Greater Columbus Arts Council. She was awarded a residency at the Marpha Foundation and also a BILATERAL artist residency through PDP in Budapest. Paige has performed with Cyrus Khambatta, Yael Bartana, Josiah McElheny. She holds a BFA from Cornish College of the Arts.

ANNIE WILSON is a Philadelphia-based choreographer, videographer, and death doula. Her dances are animistic, pop-magic church services that focus on the experience, rather than the appearance, of the body. She is a 2017 Pew Fellow in the Arts and a 2015 Independence Fellow. Her work has been presented by JACK (Brooklyn), Center for Performance Research (Brooklyn), Fringearts (Philadelphia), Bryn Mawr College (Philadelphia), Műhely Alapítvány (Budapest), and CounterPulse (LA), among others.

For Winter/Spring ’23 PDP plans to feature Contact Improvisation artists from Budapest with Jungwoong Kim in workshop sessions and showings…. TBA.

The Exchange is made possible with support from The Trust for Mutual Understanding. It hosts artists in residency; Philadelphia artists in Budapest, Hungary, and in the alternate year, Budapest artists in Philadelphia. It has been on hiatus due to the pandemic but will begin again in 2023.