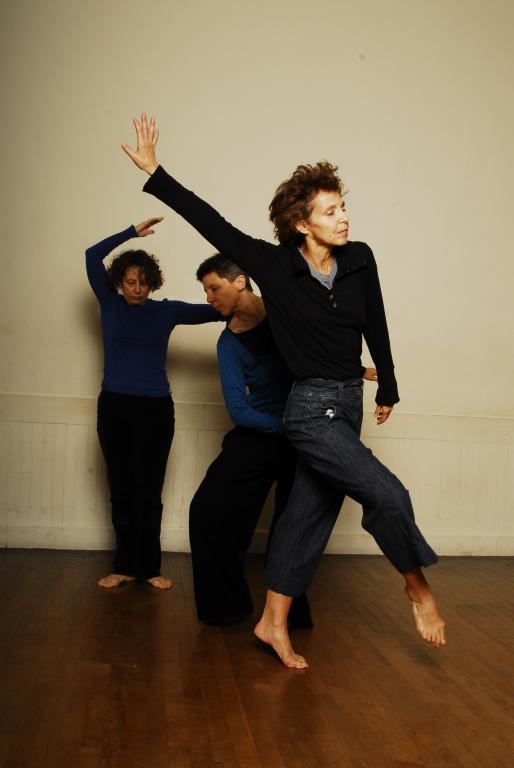 In the spirit of exploring the relationships between generations of dancers, PDP Presents will feature the World Premiere of Red Thread, a collaborative dance made by Lisa Kraus, Eva Karczag, and Vicky Shick. A cross-generational piece, Red Thread pairs the trio with emerging Philadelphia-based dancers/choreographers Meg Foley, Gabrielle Revlock, and Michele Tantoco.

In Red Thread, three women in their late fifties, with a mutual history of dancing and leading lives where art and family have intertwined, return to the studio all together after nearly thirty years. They find actions that speak to the many hats they each wear and to the many facets of their relationships. Three more women, powerful twentysomethings, join in, mixing things up and expanding the game. By turns hushed and lean, by turns abundantly physical, Red Thread is a testament to the love of dance and the lives of those who do it lifelong.

The term ‘red thread’ has many meanings– Dutch and German speakers use it to describe the line of continuity that runs through a novel or an experience, while the Chinese also use the phrase to denote the continuity through successive generations. The three choreographers’ dancing lives have connected since the late 1970s, when they were all members of/danced together in the Trisha Brown Dance Company. Both Vicky Shick and Eva Karczag are Hungarian by birth and were refugees as young children– their experiences figure into their relationship and the performance.

Built through intensive residencies in Arnhem, the Netherlands, New York, and Philadelphia, the cities where Karczag, Shick, and Kraus live, Red Thread has been developed with support from the Pew Center for Art & Heritage through Dance Advance, Pennsylvania Council on the Arts, the ArtEz Dansacademie, Independence Foundation, The Leeway Foundation, and The Swarthmore Project.

Kraus currently teaches at Temple University and is Coordinator of the Performing Arts Series at Bryn Mawr College. Her career has included performing with the Trisha Brown Dance Company, choreographing and performing extensively with her own company and as an independent artist, teaching at universities, arts centers and the Paris Opera Ballet, and writing reviews, features and essays on dance for internet and print publication. Awarded 2009 Dance Advance and Leeway Foundation funding and 2008 Choreographer’s Fellowships from the Independence Foundation and the Pennsylvania Council on the Arts, she has created over 35 performance works presented by venues across the U.S., Europe and Australia, with additional support from the National Endowment for the Arts, the New York Foundation for the Arts, the Jerome Foundation, the 5-County Arts Fund, Meet-the-Composer and Swarthmore College.-

Vicky Shick has been involved in the New York City dance community since the late 1970’s as a performer, choreographer and teacher. Shick was a member of the Trisha Brown Company for six years, during which time she received a New York Dance and Performance Award, a “Bessie” for performance.

She has also performed and collaborated with many other choreographers, including Yoshiko Chuma, Deborah Hay, Daniel Lepkoff, Juliette Mapp, Wendy Perron, Stephen Petronio, Susan Rethorst, Sally Silvers, Sara Rudner, and Christopher Williams. She is currently involved in a long-term research and performance project with Eva Karczag and Lisa Kraus. For the past twenty years, Shick has been showing her own work. She is a 2006 grant recipient from the Foundation for Contemporary Arts and is currently a Guggenheim Foundation Fellow.-

Eva Karczag is a dance maker, dancer and educator. For the past three decades she has practiced, taught and advocated explorative methods of art making. She performs both solo and collaborative work internationally.

Her performance work and her teaching are informed by dance improvisation and mindful body practices, including T’ai Chi Ch’uan and Qi Gong, the Alexander Technique (certified teacher), Ideokinesis, and Yoga. Since 1972, she has been a member of leading groups in the field of experimental dance and has taught dance at major colleges throughout the world. She has a Master of Fine Arts degree (Dance Research Fellow) from Bennington College, VT (2004). Through both her performing and teaching she aims to communicate her love of full-bodied dancing and her interest in the practice of being in the moment.-