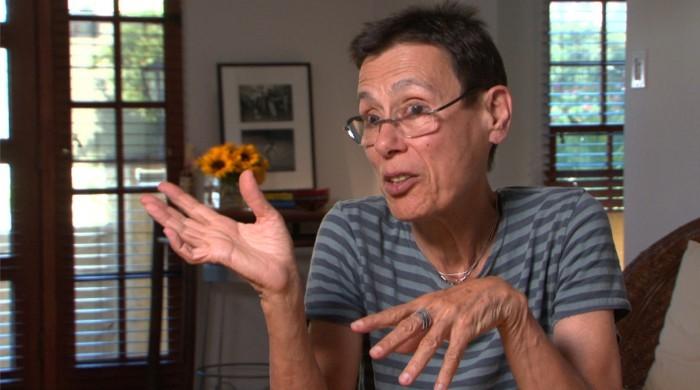 WHAT’S SO FUNNY? LAUGHTER AND ANGER IN THE TIME OF THE ASSASSINS
Wednesday, October 19   8PM
“an amalgam of jokes and rants around the current emotional and political dilemmas of the artist and concerned citizen”  by YVONNE RAINER

Yvonne Rainer, one of the founders of the Judson Dance Theater (1962), made a transition to filmmaking following a fifteen-year career as a choreographer/dancer (1960-1975). After making seven experimental feature-length films  — “Lives of Performers” (1972), “Privilege” (1990), and “MURDER and murder” (1996), among others — she returned to dance in 2000 via a commission from the Baryshnikov Dance Foundation (“After Many a Summer Dies the Swan”). Since then she has made six dances, including “AG Indexical, with a little help from H.M.,” “Assisted Living: Do you have any money?” and “The Concept of Dust: Continuous Project – Altered Annually.” Her dances have been seen throughout the U.S., including the Whitney Museum, the Museum of Modern Art, the Kitchen, Dia Beacon; in Europe at the Louvre and Montpelier, also Documenta 12, Helsinki, Italy, Dublin; and Sao Paulo. Museum retrospectives of her work, including drawings, photos, films, notebooks, and memorabilia, have been presented at Kunsthaus Bregenz and Museum Ludwig, Cologne (2012); the Getty Research Institute, Los Angeles; Jeu de Paume, École des Beaux Artes, La Ferme du Buisson, Paris, and Raven Row, London (2014). A memoir — “Feelings Are Facts: a Life” — was published by MIT Press in 2006. A selection of her poetry was published in 2011 by Paul Chan’s Badlands Unlimited. Other writings have been collected in “Work: 1961-73” (1974); “The Films of Y.R.” (1989); and “A Woman Who…: Essays, Interviews, Scripts (1999).

FILM SYNOPISIS
FEELINGS ARE FACTS: THE LIFE OF YVONNE RAINER

“The function of art is to shake us out of our complacency and comfort,” says Yvonne Rainer, whose avant‐garde performances and films have agitated audiences for 50 years. Since co‐founding New York’s influential Judson Dance Theater, Rainer’s boundary‐crossing art has been labeled in many ways: feminist, conceptual, post‐ modern, political. Feelings Are Facts examines the contradictions and creativity of this remarkable provocateur—still performing at age 80—and raises the question, What does is mean to be an avant‐garde artist today?

Yvonne Rainer exploded onto the performance scene in the early 1960’s, a protégé of John Cage and Merce Cunningham, boldly pursuing a minimalist aesthetic, using everyday, often random movements that confounded critics. At Judson, she collaborated with the rule‐breaking artists of her generation: Robert Rauschenberg, Trisha Brown, Steve Paxton, Lucinda Childs, and Meredith Monk. With foundational works like “Trio A,” Rainer radically altered the vocabulary of modern dance forever.

In the 1970s, Rainer turned from performance to filmmaking, bringing both humorous storytelling and dense theory to seven independent features. As she investigated subjects like political power, terrorism, lesbian sexuality, and breast cancer, the labels again poured forth. Were her films “difficult” or “accessible”? Funny or frustrating? After 25 years of filmmaking and encouraged by dancers including Mikhail Baryshnikov, Rainer, in her 60s, returned to choreography once again to make courageous, unpredictable dances. Feelings Are Facts presents Rainer from her revolutionary roots to her tireless current explorations, breaking rules and challenging audiences no matter what decade she finds herself in.

Jack WalshFeelings are Facts: The Life Of Yvonne Rainer film by Jack Walsh

Inhabiting the worlds of television, film festivals and art museums, Jack Walsh’s films incite, probe, challenge and inform viewers on topics ranging from cultural icons to social justice to sexual identity. Working in both the experimental film and the documentary film genres, over the course of his career Jack directed nine films: Feelings Are Facts: The Life of Yvonne Rainer, 2015; The Lost Generation, 2004; The Second Coming, 1995; Dear Rock, 1993; Present Tense,1987; Working Class Chronicle, 1985; Document Unearthed…, 1984; Basic Training, 1984; and Beachwalk, 1983. He is an Emmy Award-winning producer of the documtaries And Then One Night: The Making of Dead Man Walking and Screaming Queens: The Riot at Compton’s Cafeteria. His other producer credits include Hope along the Wind: The Life of Harry Hay and Girl Trouble.+ Show moreLocation: Christ Church Neighborhood House20 N American StreetPhiladelphia 19106Phone: (215) 546-2552See map: Google Maps