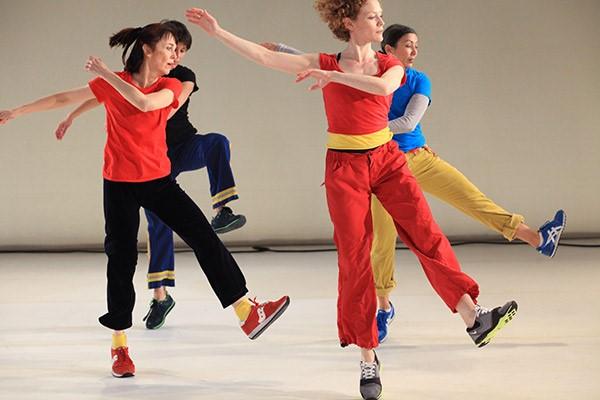 What can be learned today from Yvonne Rainer’s 1966 influential work Trio A? Fifty years later, the impact of Rainer’s revolutionary ideas and work is still evident in the current choreographic scene. Although Rainer’s famous “No Manifesto” was not written about Trio A, this dance is a manifesto in itself. Its form, vocabulary, and performing stance challenged traditional choreographic methods and modes of presentation. Pat Catterson’s Trio A Workshop provides an introduction to an aesthetic that has served as a springboard for succeeding generations of dance makers.

In this Workshop, Trio A’s philosophical, physical and historical relevance is examined and experienced.  Students will learn part of the dance, be given composition exercises around its projects, some reading assignments, and be led in a discussion of its ideas, contexts and their experiences.

Workshop participants please read the following articles. The first contains three by Yvonne, but only read the first one and maybe the second. The second reading is by Pat about her experiences seeing, learning performing and teaching Trio A. It was published in Dance Research Journal.

Rainer, Yvonne. The Mind is a Muscle,  A Quasi Survey of Some Minimalist Tendencies in the Quantitatively Minimal Dance Activity Midst the Plethora,or an Analysis of Trio A, Some Non-Chronological Recollections of the Mind is a Muscle, Profile: Interview by Lyn Blumenthal. A Woman WhoŠ Baltimore: John Hopkins University Press, 1999. 27-84.

Yvonne Rainer, one of the founders of the Judson Dance Theater (1962), made a transition to filmmaking following a fifteen-year career as a choreographer/dancer (1960-1975). After making seven experimental feature-length films  — “Lives of Performers” (1972), “Privilege” (1990), and “MURDER and murder” (1996), among others — she returned to dance in 2000 via a commission from the Baryshnikov Dance Foundation (“After Many a Summer Dies the Swan”). Since then she has made six dances, including “AG Indexical, with a little help from H.M.,” “Assisted Living: Do you have any money?” and “The Concept of Dust: Continuous Project – Altered Annually.” Her dances have been seen throughout the U.S., including the Whitney Museum, the Museum of Modern Art, the Kitchen, Dia Beacon; in Europe at the+ Show more

Pat Catterson first worked with Ms Rainer and performed TRIO A in 1969, first taught the dance for her in 1971, and has assisted and danced for her since Rainer’s return to choreography in 1999, touring nationally and internationally. She has taught and performed TRIO A countless times since and has found that learning it is the best way to understand the aesthetic shift it represented. Catterson has written about her experiences seeing, learning, performing and teaching TRIO A in her essay “I Promised Myself I Would Never Let It Leave My Body’s Memory” published in the Winter 2009 issue of Dance Research Journal. Most recently she set early Rainer works on the Stephen Petronio Company for his Bloodlines Project, for the exhibit Yvonne Rainer: Dance Works at Raven Row Gallery in London and performed these and other works herself in Boris Charmatz’ Twenty dancers for the XX Century at the Tate Modern.+ Show moreLocation: Performance Garage1515 Brandywine StreetPhiladelphia 19130Phone: (215) 546-2552See map: Google Maps